Sharks Make it to State 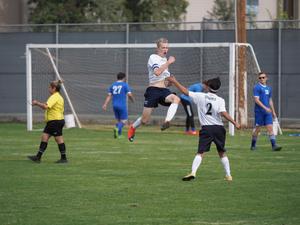 History was made by the Puget Sound Adventist Academy Soccer Team.

The Puget Sound Adventist Academy Sharks soccer team made school history this season as they claimed their first ever birth in the 2018 WIAA State Tournament.

The Sharks capped off the most successful season in PSAA soccer history by going 11-1 in the Sea-Tac League and making a deep run in the playoffs.

The Tri-District playoffs saw some very exciting and tense moments; a shoot-out victory over Tacoma Baptist followed by a game winning goal with a little over two minutes left to give the Sharks a win against Christian Faith.

The Sharks historic season ended with a 1-0 loss to Evergreen Lutheran in the State Playoffs. Davis Nordby, Senior center-mid accomplished another first for the soccer program as he was selected WIAA’s player of the week for scoring 8 goals in 3 games, including 2 hat tricks.